This experiment was conducted in the Research and Experimental base of the Agricultural University of Enbekshi – Kazakhstan, in the Almaty region during the period 2012-2013. The subject of the experiment was oilseed flax, Kazar variety (Kazakhstan). The experiment was performed by applying the method of the
fragmented land plots, with 4 replications, the size of the experimental land plot being 15 m2. Flax-seeds were sown in rows, the distance between the rows – 45 cm; the sowing density – 350; 400; 450 plants per square metre. The following features were recorded: development phenophases, number of plants per square metre, field germination, structural elements of the yield and seed yield. The following conclusions could be made as a result of the study: the vegetation period during the 2012 year was shorter compared with the one in 2013; regardless of the sowing density the development phases happened almost simultaneously, however, there was a tendency towards a longer vegetation period when reducing the sowing density. In the variants with a larger density a larger number of plants grew, the lowest germination rate of the seeds was recorded for the variant with sowing density of 450 plants/m2 (87.25%; 87.50%), whilst the highest germination rate was achieved with the variant with sowing density of 350 plants/m2 (93.75%; 94.80%), In the variants with sowing density of 400 and 350 plants/m2 we achieved higher yields compared with the first variant, i.e. 450 plants/m2. 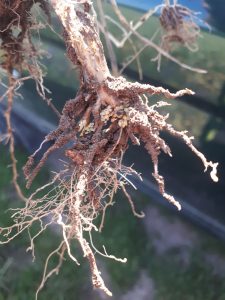